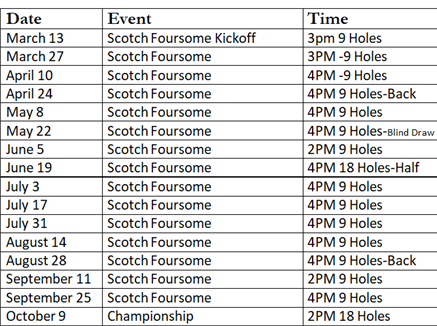 Newnan Country Club ‘s Scotch Foursome kicks off Sunday, March 17 – Shotgun-4 PM. When playing Scotch Foursomes, think of it as scramble off the tee, then alternate shots into the hole. To add to the fun factor, each team is a boy/girl team. It works like this:

Why This Format Is Called Scotch Foursomes

It appears to be a nod to golf’s roots in Scotland. When you see “Scotch” in the name of a golf format, it likely refers to “alternate shot.” It’s an indication that the format is entirely or partially alternate shot.

When is Scotch Foursome Played

Scotch Foursome is scheduled to be played on every other Sunday at 4 PM with a few exceptions. Most play is 9-holes. There are 3 dates planned for 18-hole rounds. The dates are posted on the Proshop bulletin board and on the calendar on our website. You must play in 3 events during the season to qualify to participate in the end of the season championship.

Each week, there will be a reminder in the weekly blast. We will post a signup sheet on the board outside the Proshop. Signup with you and your partner’s names. If you don’t have a partner and are interested in playing, we will begin a list, so we match you with a partner.

Check in at the Proshop, pay for the round and $5/person for the prize pot. Handicaps are required. If a player does not have a handicap, 1 stroke/hole will be assessed as the handicap. Handicaps will be adjusted after each play.

Following play, scorecards are turned in to the Proshop. The group stays and enjoys dinner together. The Pro scores and makes awards – 3 places pay – low gross, low net, low putts. No team will receive more than one award each play day.